I'm going to choose mail-order parts from a reputable vendor, in this case, MWAVE.

Now, I'm going to want a high-end system for personal and office use, not for playing games, at least not unless my 7 year-old demands it, so I will be most interested in the speed of the machine, minimizing latency, that is its delay under load, reliability, ease of maintaining a low temperature, and noise.

I do a lot of photography and I have many hundreds of thousands of photographs, and I do a lot of batch work on, and to, photographs for clients, and I often load my systems with many disk intensive tasks all at once. So I care not only about the speed of the disk subsystem, but also its speed when heavily loaded.

I don't mind if the machine has to wait for me -- I cannot stand WAITING FOR THE MACHINE.

We will bypass the onboard Intel RAID and standard SATA disk controller and upgrade to an Adaptec 5805 RAID controller capable of addressing up to 8 SATA or SAS disks. It has an onboard processor to offload disk related tasks from the main CPU and an optional battery backup for the 512 MB cache. I love it.

You want to to copy 4 GB of 3, 000 files, it's a work of a few seconds. Or do tasks involving such things12 times simultaneously, that takes just a minute or 2. And the machine still responds nicely to the keyboard and mouse under load. Wonderful.

We will choose 4 Western Digital 1 TB (1000 GB) RAID specific SATA drives for a RAID 10 internal subsystem, which have worked very well for us.

The motherboard will be an ASUS RAMPAGE II Extreme X58 chipset board to accommodate the latest Intel Extreme 4 Core processor, the i7 965. We will mildly overclock this CPU from 3.2 GHz to 4 GHz, but still be able to use the stock fan, because the CPU runs fairly cool compared to earlier, larger chips, and because the motherboard has a sophisticated heat-pipe based temperature control and distribution system. The ASUS motherboard comes with a fairly decent sound card that takes up 1 PCIE slot.

Power Supply will be an OCZ/PC Power and Cooling 750 watt Silencer or an Antec NeoPower 650 (watt) modular supply so you only use the cables you need and keep the inside of the case clean. You can buy a power supply tester from MWAVE for about $10 -- then you know it's good.

Graphics card is a Sapphire ATI Radeon HD470 512 MB unit -- you can always get another card and strap them in Cross-Fire if you REALLY need to warp out in HALO.

The RAID cage is a 3 half-height, 4 drive unit that uses no trays and will fit directly into the front drive bay opening of any case offering 3 half-height or more openings, and that is thePromise 4600. If a drive fails under RAID 10, you will get an audible warning, and all you have to do is pop out the failed drive, which will be indicated by the Adaptec software, and pop in a new drive, after which the new drive will auto rebuild. Wonderful.

We will need some kind of DVD/CD drive -- they are so cheap these days -- we'll take a Sony rewritable DVD/CD.

The case itself will be the Antec P182 which is quite large for a mid-tower case, and very quiet as well, even with 3 X 120 mm fans, 2 more fans optional, and external fan controls. It''s black, and it sheds heat very well.

You can feel free to modify the above parts in case you do not like my choices, but you may run into some fit issues, such as rear extension of the RAID cage interfering with cable routing or some such, and you may run into heat dissipation issues as well.

One optional item would be a server class Network Card (NIC), such as the Intel Pro 1000/PT Gigabit PCI Express card, which will offload a lot of network traffic processing from the quad core CPU, although for less than multiple streaming downloads the on-board network interface is fine.

OK, that doesn't include shipping, or a keyboard and mouse, or a monitor, but you can pick the accessories you like and shipping will be cheap.

In a minute I'll give you some tips on how to put it together, but first let's take a look at a top of the line Dell XPS 730x H2C, which, absolutely stripped, starts out at $4399, and runs at less than 3.8 GHz while our machine, with the same processor runs at 4.0 GHz. The Dell does not include 8 GB memory, 2 TB of RAID, Vista Ultimate, the ATI Graphics, or the high-end Adaptec RAID controller. 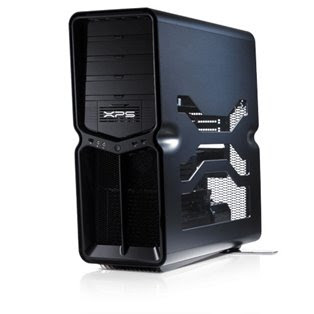 Comparably equipped, the Dell would run $5400, but would still not have the Adaptec 5805 SAS which Dell does not offer, nor can you add more memory. Even then, it will run more slowly.

If you want to make a more direct comparison you could take out the Adaptec card and drop the price of our system to about $3200, and then it will compare fairly directly to theDell at $5400.

Well, OK, to be fair, Dell gives you a great warranty -- and you PAY for it.

Also true is the fact that, if you break something on your self-built system, you own it, even if it's under warranty.

Now the Dell has a special CPU cooling system with a refrigerator type Peltier Effect heatsink to draw heat from the CPU, and it does a great job. You can even buy a similar system from the company Dell licenses it from, Coolit Systems, which makes the Freezone Elite, for a roughly $330 street price.

But our system with its great ASUS motherboard and well ventilated case, DOESN'T need it.

Cools just fine at the 4 GHz overclock with the Intel supplied fan.

Think of it as a SLEEPER, you know, it looks like, say, an Acura, upscale but quiet, but it's REALLY a Porsche 911 Twin Turbo.

Now if you want to overclock some more, you may need the Freezone Elite, otherwise ...