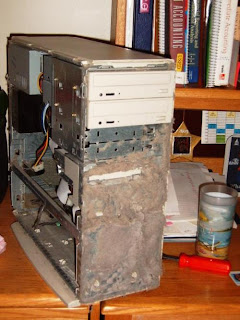 Beware of Dust Bunnies: they will send your computer to heaven!

It's that time of year. Time to ... clean out your computer! No, not all that bloatware you've installed in the past 12 months, although getting rid of that stuff would be nice, but rather ... the actual dust and dirt that builds up inside the PC itself.

It never fails to amaze us how invisible the actual machine becomes once it's installed. Except for popping in a CD or downloading a photo to it, who actually looks at the box? Not too many people. But all those little fans inside are spinning away, sucking dust bunnies into the case to the point where -- they can cause problems and FAILURE, sometimes spectacular failure.

Dust is conductive, and can get into the open expansion slots and eventually short a connection causing a crash, or it can fill a power supply so that heat cannot be exhausted and so it dies, or, as in one exciting and memorable case, it can catch on fire from the spark in a short.

You need to blow out the dust. A hair dryer on cold setting works well, and a vacuum cleaner with the hose reversed into the exhaust does, too.

Or you can use a lot of expensive canned air, but the blow dryer is cheaper and just as good.

Be especially careful to blow out all of the empty expansion slots, and any empty memory slots, as well as the power supply, heat sinks, fan blades, and cd/dvd or floppy openings.

It could take a good 10 minutes to get all of that dust out of a machine that hasn't been cleaned in a year. After about a year and a half, or sooner, depending on the sticky stuff in your air, the dust will get a bit oily and hard to remove. Then you have a bigger job, that may take a lot of hand wiping.
We see a lot of machines whose owners say, "I don't know what happened to it. It just died." Often, pun intended, they've Bit The Dust.

Hey, cleaning the computer is necessary. You know, like changing the oil on your car. What??? Yes, you have to do that, too.
~Ted
Image courtesy of Tech Republic. Take a look at all of their other dust catchers!